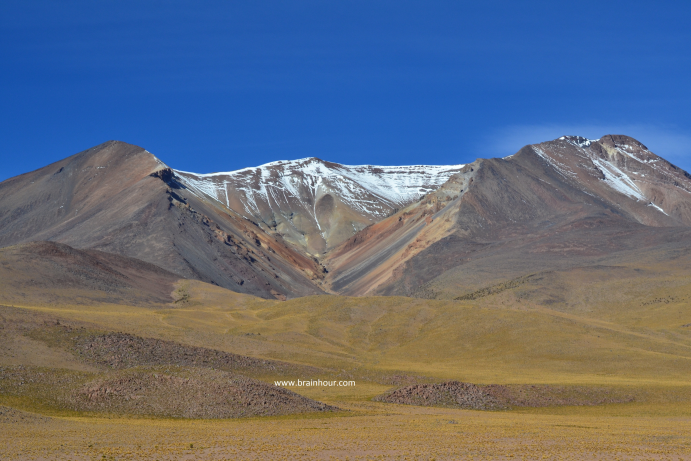 My whole 19-day Peru/Bolivia trip was centered around this ethereal Salar de Uyuni trip.  This excursion was both challenging and exhilarating.  To minimize the risk of altitude problem at 5000m we pushed the tour toward the end of our trip, giving ourselves plenty of time for acclimatization;I felt as normal as I could be for the entire trip. It also involved many grueling hours of endless miles bouncing, in a 4X4 jeep, over bumpy, rutted, sometimes non-existence, roads and staying at basic accommodation with no heats at altiplano.  Despite the physical discomfort, we were greatly rewarded with the otherworldly views and wildlife that had permanently ingrained in my mind. Words can't fully describe how these surreal breathtaking scenaries have on human five senses. 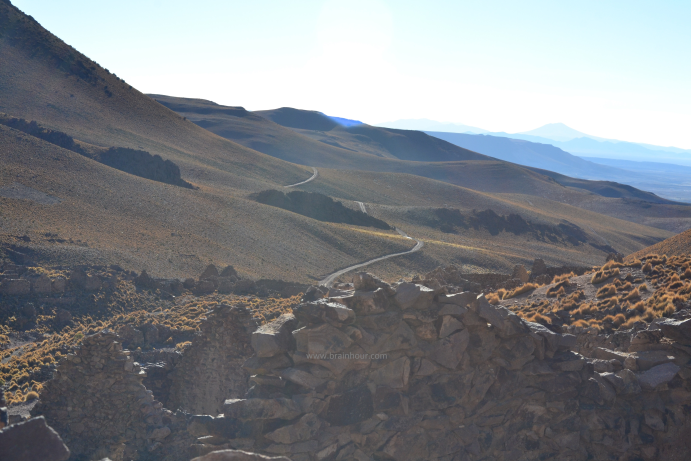 The breakfast at hotel Mitrus was served at 7:35am while all Salar de Uyuni tours started at 7:55am.  So we literally rushed through the breakfast.  I wish they are as accommodating as the hotels in Machu Picchu that serve breakfast at 4:30pm for customers taking the first bus up to MP citadel at 5:30am.

Our group had five tourist/passengers, three of us plus a pair of love birds from French.  We have one driver/tour guide.  Normally the tour includes a cook as well.  Ours doesn't.  Six people in a jeep with two per row.  Quite comfortable.  Upon explanation, the places we will be staying will have a cook and also the lunch will be precooked the night before.

Our driver and also our tour guide speaks only Spanish.  Luckily the French guy, Daniel, knew Spanish and hence automatically becomes our tour translator.    His help was much appreciated. 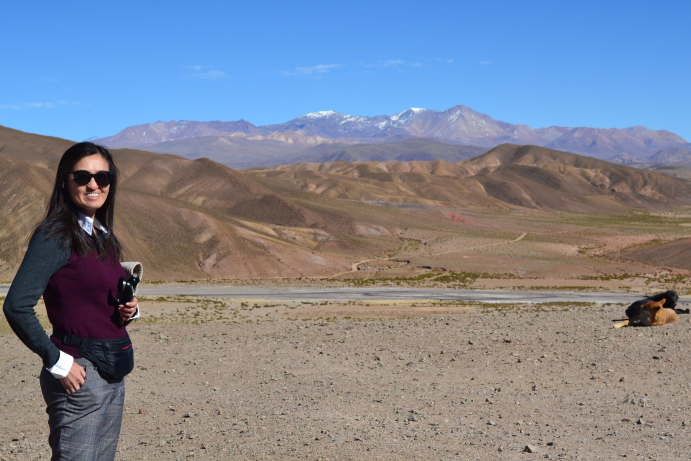 We explored the canyon land outside of Tupiza region, southern Bolivia, border with Chile.  The red rock formations from this region reminded me of Utah's Canyonland and also Ashes National Parks. But here it seems to offer more variation of landscapes and also at a higher altitude.

We slowly ascended from 2000 plus to 4000 plus meters above sea level.

With Boliviano 15 admission fees, we visited some ruin sites built by Spaniards.  Judging by the size, the population of the town could easily be in the hundreds.  The whole town was wiped out by a plague in late 18th century..  We were allowed to go inside the mining site through a tiny steep dark hole.  Without headlight, none of us ventured further than 5 feet deep.

During the colonial time, they exploited all natural resources they could possibly find.   Among others, the natural resources were gold and silvers.  They were mostly shipped k to Spain for the majesty; the remaining was used locally for religious and personal adornment purposes.  For example, the altar at San Francisco cathedral in La Paz was made of pure gold and appraised to be cost at 40 millions. 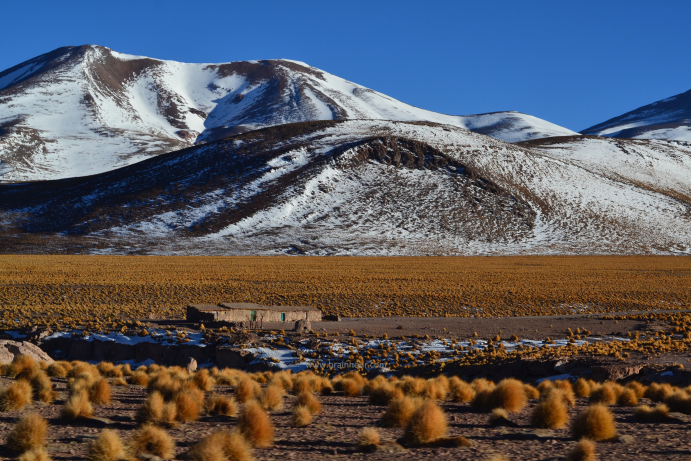 We ended the day by entering the Eduardo Avaroa Andean Fauna National Reserve. 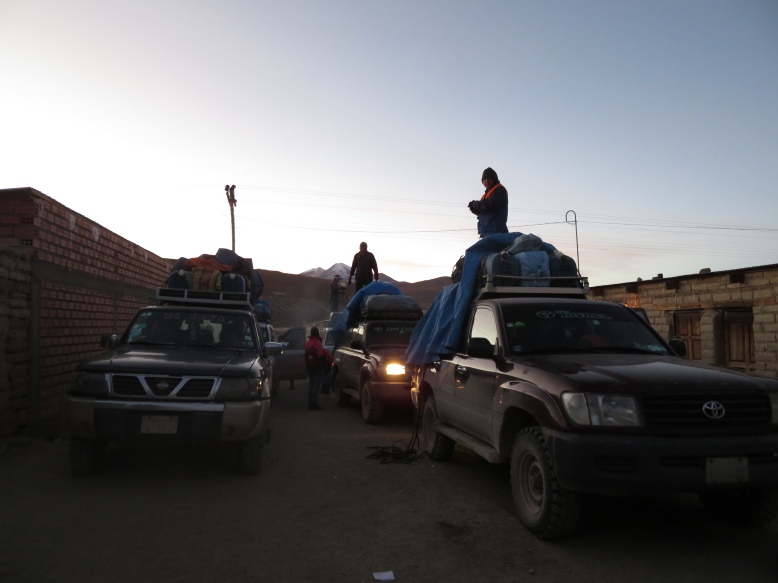 Our basic accommodation. Everyday we packed/unpack the luggage, loaded/unloaded to/from the jeep.
The accommodation at 4300m.a.s.l was very basic and simple: a bed with two blankets and a shared toilet outside of the bedroom. Sleeping in the subzero temperature without heat is no small matter.  It required some mental discipline. I cocooned myself in my winter coat, layer clothing, wool hat, and  skiing pant in addition to a sleeping bag and two blankets to maximize the heat insulation.  No deep sleep and had some weird dreams.

My alarm went off at 5:45am as we needed to depart at 7:30am right after breakfast for our next destination.  We didn't stay at the same shelter each night therefore each night we unpacked and each morning we repacked.

Less than five minutes after i got out of the bed, my feet began to feel pain and frozen due to my summer running shoes despite my wool socks.  But it was a good sign that I actually felt hungry, which indicated I was free of the altitude sickness. 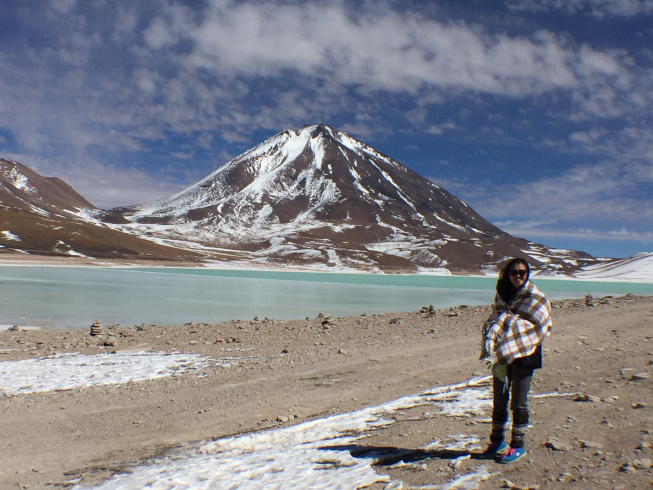 Our first stop from the accommodation was the llama farm.  Due to the extreme cold weather the shepherd kept all llama in the manger to keep each others warm.  if they were left in the altiplano field by themselves they might be frozen to death.

Loved the various lagunas we visited.  Some lakes contain minerals such as epsom salt and material for glasses used for windows. Laguna Verda is my favorite.  It is in green color due to the high content of arsenic and copper and is complemented by the imposing presence of Lincancabur volcano.

Wind chill and wind gust at altiplano is bone biting. We didn't stay long in most of the lagunas for this reason. 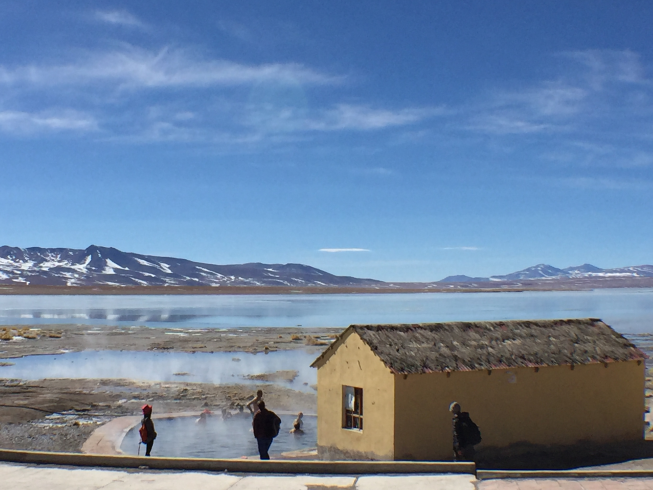 Aguas Thermales de Polques: We spent 25min at the hot spring.  Many ladies and gentlemen enjoyed it; i didn't as the thought of having no shower afterward cringed me. 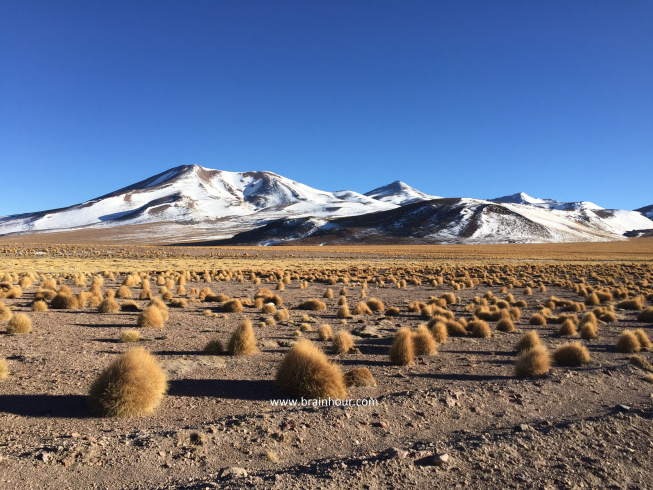 Somewhere up in the Andes mountains 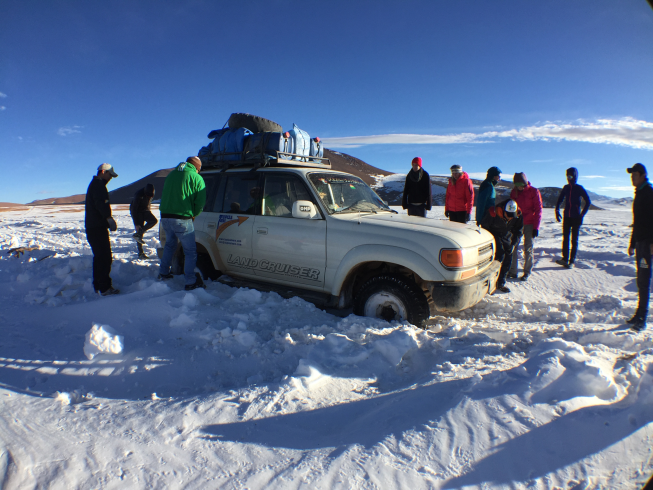 We finished lunch at 2pm.  We were the last jeep headed to the Laguna Colorada, the red lake for flamingo.   One our way there, one jeep ahead of us broke down. All five other jeep drivers of various companies worked together to fix it.  After 1.5 hours the jeep was able to move.  We continued on.  Due to the road condition we first forgo the geyser.  On our way to Laguna Colorado, the red lake, ours and another jeep got stuck in the deep snow at various points. The snow was probably over 14in high.  All drivers, including those who have successfully crossed the deep snow, stopped and selflessly came to our rescue. As I mentioned earlier the temperature was in the subzero with wind gusts of no less than 20 mph.  Some wore glove and some worked with bare hands.  They first shoved the snow around all four tires, then scavenging any rocks in the nearby areas half beneath the snow, lastly placing these rocks around the tires. The last step would be for the driver to press the escalator to move forward while others, including the male tourists, helped pushing the car forward.  It worked most of the time.  This effort was repeated each time any jeep got stuck. Unfortunately at one point, we got stuck for more than 1 hour.  We watched the sun descended further by each passing moment; the sunlight changed from literally blinding bright white, to gradual orange, to orange red, to residual dark orange red and then dark.  It was the decision moment; our driver decided to turn back.  It was another 1.5 hours to get to our shelter.  Their spirit of collaboration and teamwork that are above their business competition moved me greatly.  They earned my utter respect. As much as they rever the grandeur of the Andes mountain, they don't lose sight of the extreme brutality of the altiplano weather. To leave anyone behind could mean fatality.  Their selflessness was fully exemplified in their effort of helping their business competitor. 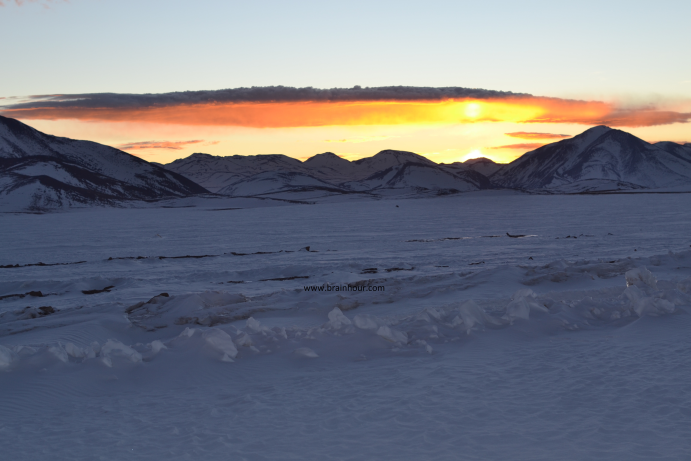 We safely arrived at our shelter at 8:30pm.

Despite Bolivia's wealth of natural resources, she is still a very poor country.  This paradox remains an enigma for me, granted Bolivia is not a simple country to examine. 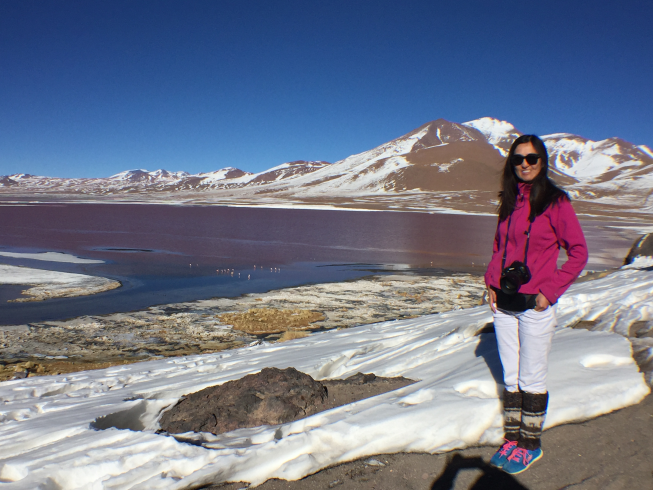 After breakfast, we headed straight to bloody red Laguna Colorada.  The amazing bloody red coloration is caused by red sediments and algae in the water.  The lake also attracts the James’, Chilean and Andean flamingos, the latter being the rarest flamingo species in the world. 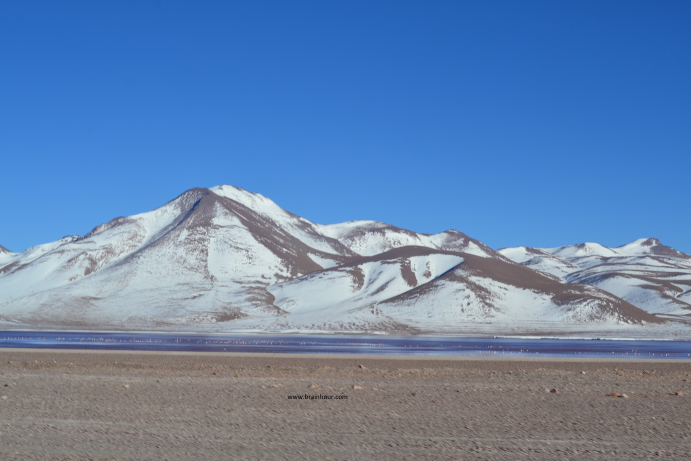 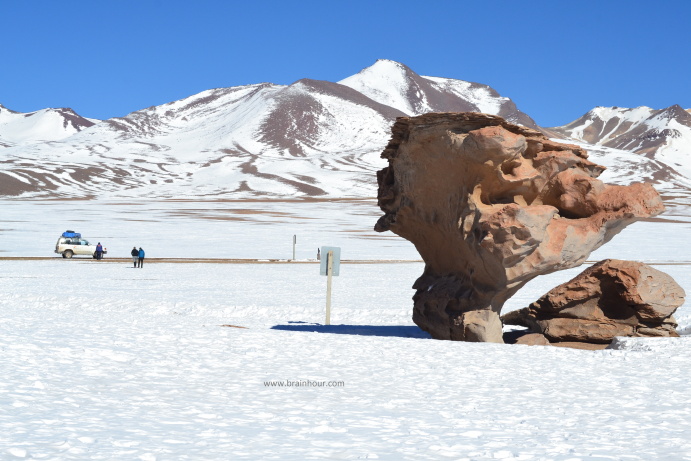 Arbol de Piedra: Some unusual lava rock formations due to wind erosion. Beware of both the sun and wind burn in this area.

Sololi desert is a non-sandy desert and a part of Atacama desert in Chile.  It amazed me that any animal, whether it be a bird or mammal, could sustain itself off so little vegetation in such a harsh environment 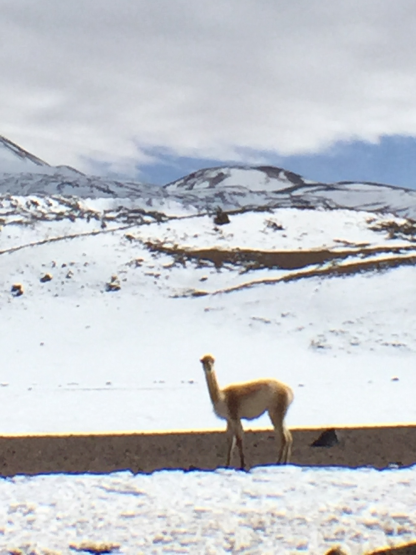 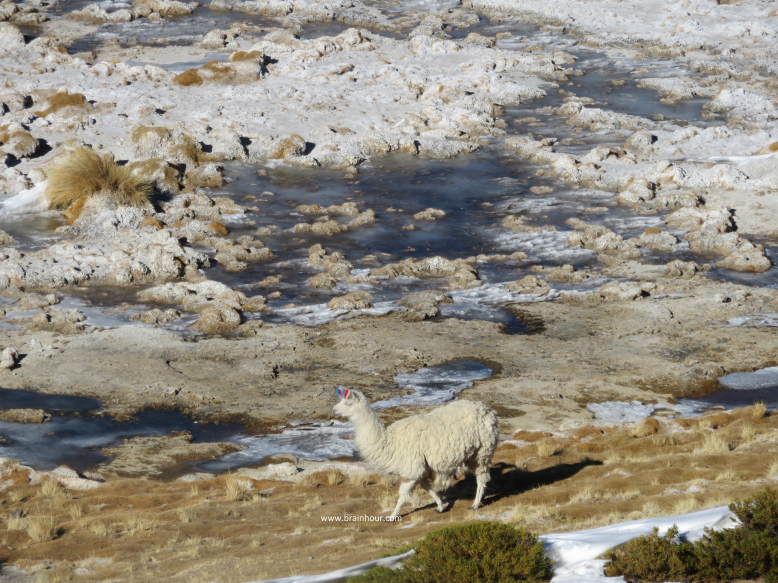 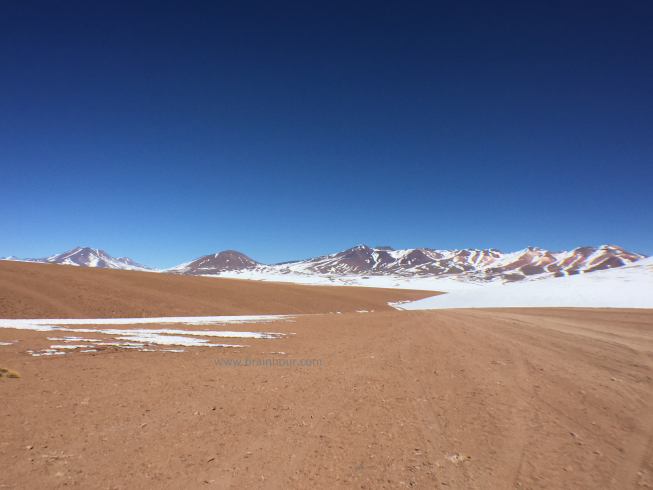 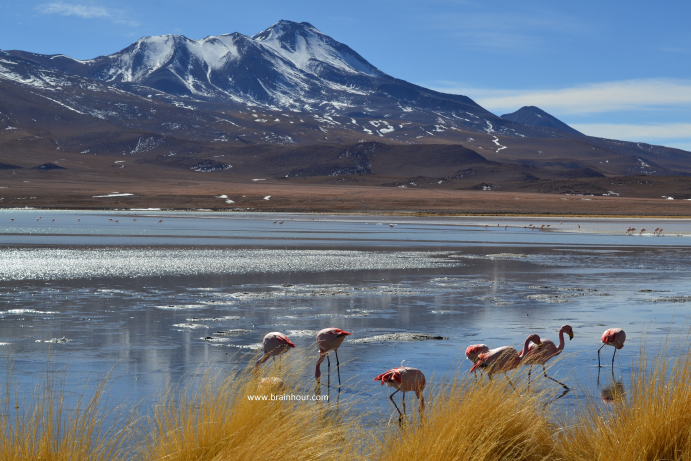 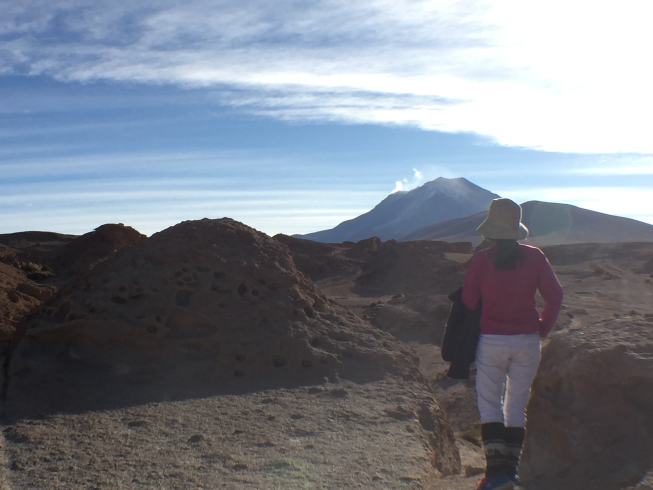 We spent lots of hours driving through snows and deserts. We reached Uyuni Salt Flat around 7pm - the earliest arrival time of all three nights. The temperature was higher, warmer but still freezing. The only "regret" I had in this trip was the inability to capture the most beautiful starry night at such a high altitude because I left my long-range camera lens at home. Below is what I found on the internet to prove my point.