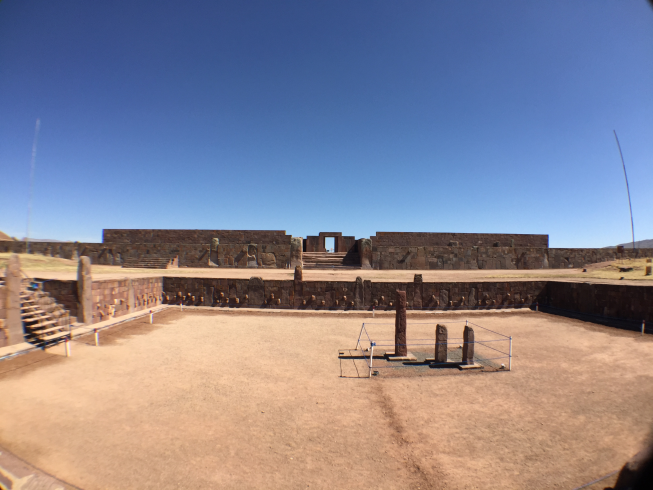 At 4000 m.a.s.l., these early inhabitants survived by cultivating hardy, frost-resistant crops, i.e. tubers and quinoas and by animal domestication.  Llamas were used as pack animals and alpacas for furs.  Their cultivation technique continued to be enhanced to suit the altiplano climate and years later was further developed, by Tiwanaku people, into the raised mound planting technique that separates plants from canal and water.  This technique has been proven to be very effective and most productive, yielding the most crops among other techniques.

As to how Tiwanaku people, among other tribes, rose to dominate the region remains an enigma.

Tiwanaku (or Tiahuanaco) was the capital city of this ancient empire between 200 B.C. to 1000 A.D.  In spite of the lack of a writing system, the archaeological remains indicate that the city’s cultural and political influence might expand north to South Peru and south to North Chile.

Elongated skulls have been found in the ancient burial sites.  Many are the result of a practice, among the elites, of intentionally deforming the skull by binding applied to the children during their early development years.  According to our tour guide, these elites believed that having a longer skull would increase one’s superiority and also in intellectual capacity.  Mummifications have also been discovered in this area. 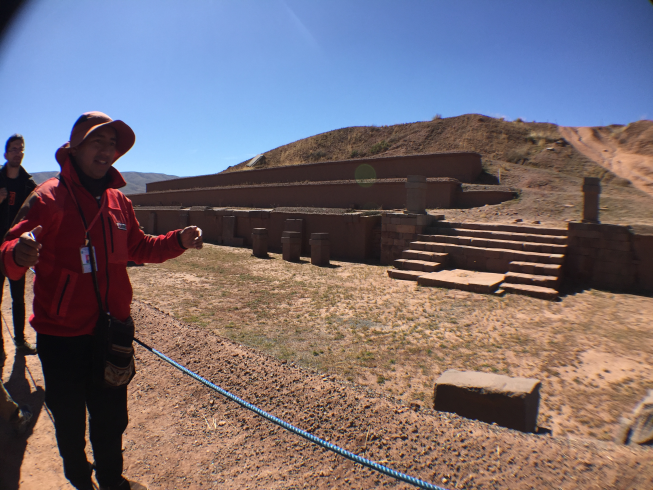 Among the five ruin sites, two of them are terraced step pyramids. The larger one is Akapana; the other one is Pumapunku. This monumental construction measured approximately 200 by 250 meters (656 feet by 820 feet) at its base and was more than 16.5 meters (54 feet) high. 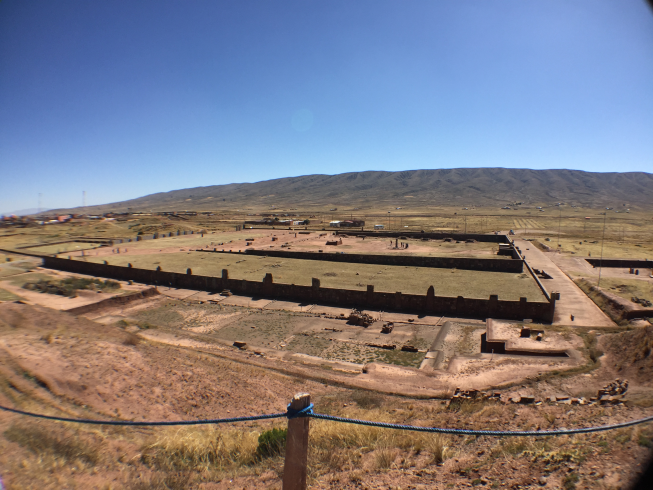 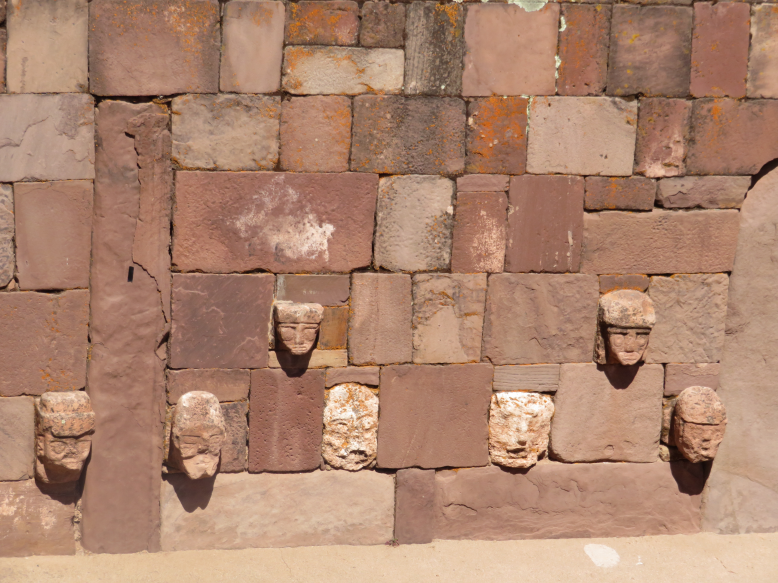 The sunken temple is square and about 27 meters (89 feet) long on each side. The walls of the sunken temple were decorated with the images of “deity-like beings with impassive faces and elaborate headdresses 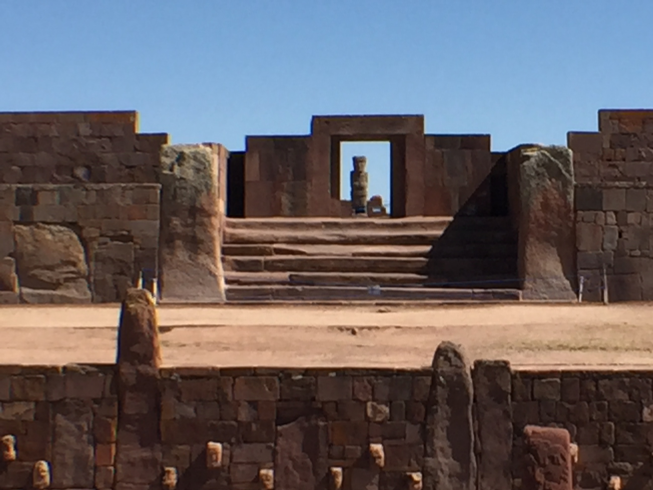 The Kalasasaya and sunken temples at Tiwanaku. The Ponce Monolith is shown aligned with the Kalasasaya main door. At equinoxes, the sun shines into the monolith. 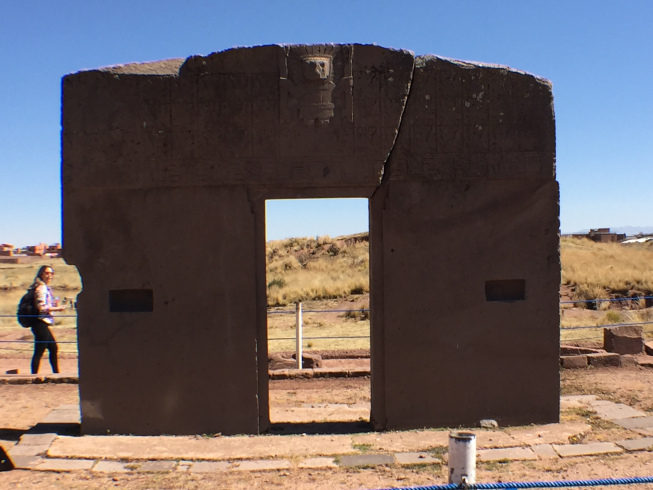 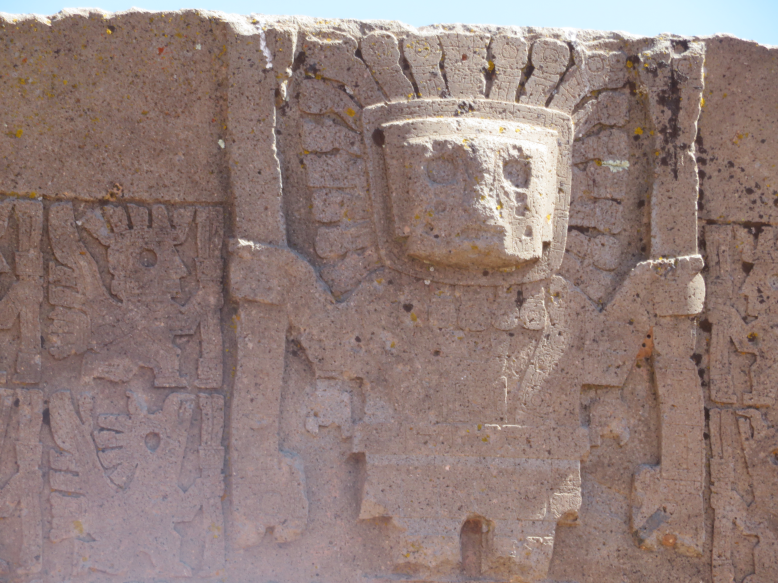 Viracocha is carved into the noted Gateway of the Sun, to overlook his people and lands. 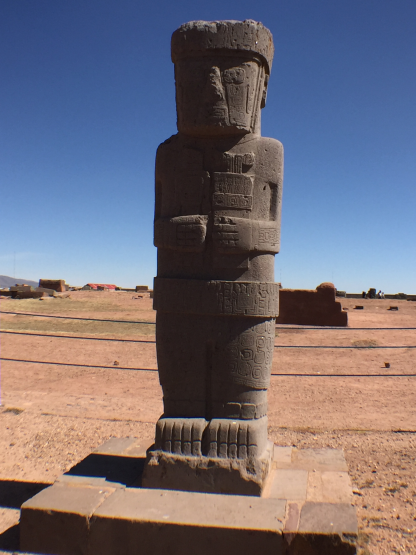 The Ponce Monolith, 7-foot height, is placed at the central axis and faces the entrance of Kalasasaya. It is almost covered with hieroglyphic-like carvings, and the meaning of these carvings is unknown. The figures resemble those on Easter Island. 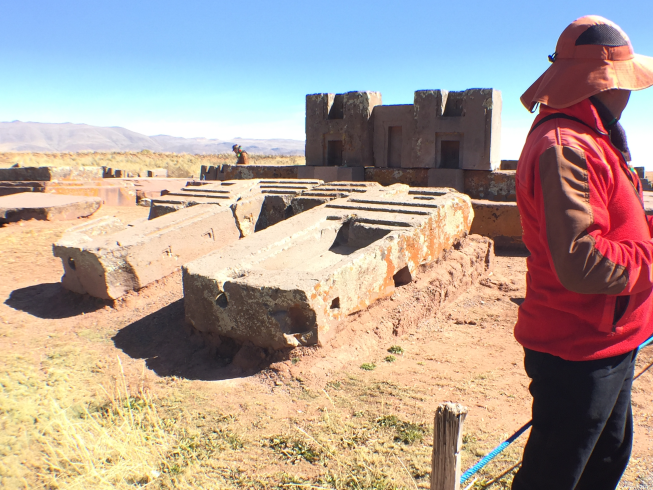 Puma Punku. There are quite a few gateway of the sun look-alike blocks of columns lying there. The grey granite stones, some weights 20 to 30 tons, are recently discovered to be very magnetic.

Some of the stones found lying at Puma Punku are of mammoth proportion.  The largest of them is 25.6 feet long, 17 feet wide, and 3.5 feet deep, and is estimated to 131 metric tons.  The highly sophisticated stone-cutting skill with such precision that was illustrated in these blocky columns have drawn comparison to the Egyptian pyramids.  Furthermore, other circumstancial evidences, i.e. gateway of sun look-like block of stones, elongated skull, and mummifications have raised question whether Puma Punku was indeed built by some more advanced civilizations than Tiwanaku.  Owing to the lack of writing language, the city nor the people leaves no explanations to the abrupt fall of the empire.   Some scholars even concluded the site was constructed as early 12,000 B.C.

Tiwanaku's historical backgrounds, archaeological finds, scholars' exhaustive studies, and their interpretation of their findings are extremely interesting.  You can find more information here.